Aakash Power is a Global Supplier, Exporter, and Distributor of Crane Duty Motors, delivering complete motor solutions to the world’s most demanding industries. Our Crane Duty Motors are approved by the international set of standards.

TEFC squirrel cage induction motors specifically designed for DOL operated Crane duty / intermittent duty application. The motors are designed to take care of the high electrical and mechanical stresses arising due to frequent starts - stops associated with intermittent duty application. The motors are compact providing high output for a given frame size and have low inertia. These salient features make them most suitable for EOT Cranes.

The stator frames in general are made of rugged cast iron with integral cast feet in case of foot mounted motors. Maximum cooling surface is obtained by quadrangular disposition of cooling ribs.

Cooling and Degree of protection

Motors have cooling arrangement as per IC411 (TEFC) in accordance with IS:6362. The degree of protection of standard series motors is IP-55 as per IS:4691.

For motors remaining idle under severe cold climatic condition or under highly humid atmosphere, use of anti condensation heating is recommended. The heating serves to maintain the average temperature inside the enclosure at a level so as to avoid condensation. The heating must be switched OFF while motor is in operation

For motors upto 132 frame, 2 terminals of either STAR or DELTA connected winding may be connected to 1- phase, 24 volts, A.C. supply for anti-condensating heating. For higher frames, separate space heaters are provided with termination in separate terminal box.

This is an additional device for thermal protection . The thermistors are embedded in the winding overhang so as to sense abnormal winding temperature there by tripping the motor supply line through a relay.

These are devices to sense the winding or bearing temperature by means platinum based element. These can be provided for frames 280 & above.

A sequence of identical duty cycle, each consisting of a period of operation at constant load & a rest period. These periods being too short to attain thermal equilibrium during one duty cycle. In this duty type, the starting current does not significantly affect the temperature rise. (Fig. 2)

Unless otherwise specified, the duration of the cycle is 10 min. The recommended values for the load factor are 15, 25, 40 & 60 percent. 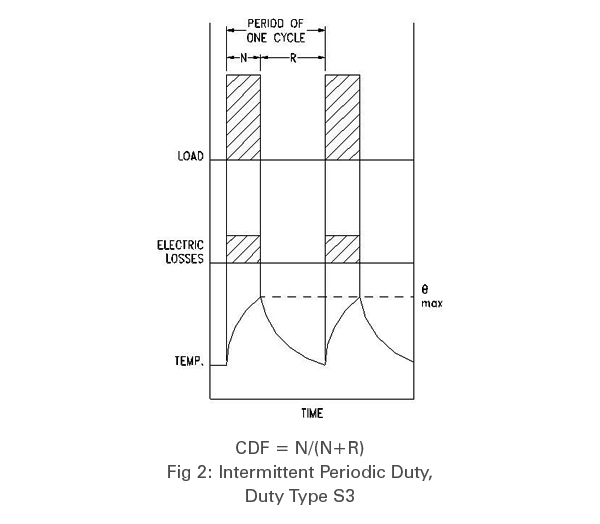 A sequence of identical duty cycles each consisting of a period of starting, a period of operation at constant load & a rest period. The operating, rest & de-energised periods being too short to attain thermal equilibrium during one cycle. (Fig. 3) 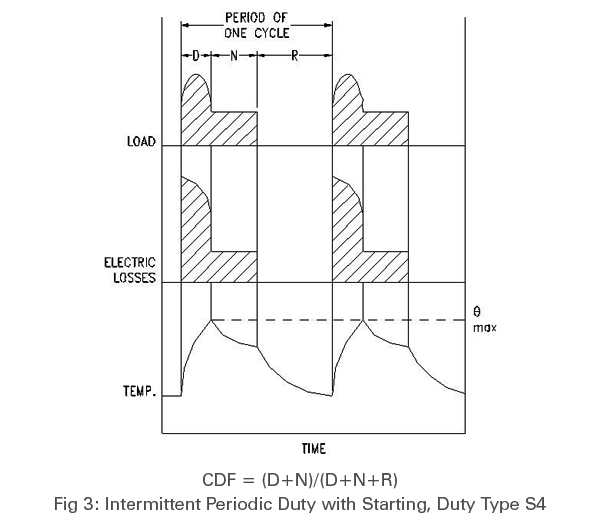 A sequence of identical duty cycles each consisting of a period of starting, a period of operation at constant load, a period of braking & a rest period. The operating, rest & de-energised periods being too short to attain thermal equilibrium during one cycle. In this duty, braking is rapid & is carried out electrically. (Fig. 5)

Note: In all the above type of duties, the loading duration & the idling duration of the cycle are so short that the steady state temp. is not reached. While working on these identical cycles continuously, the motor temp. rise must not exceed the permissible values. 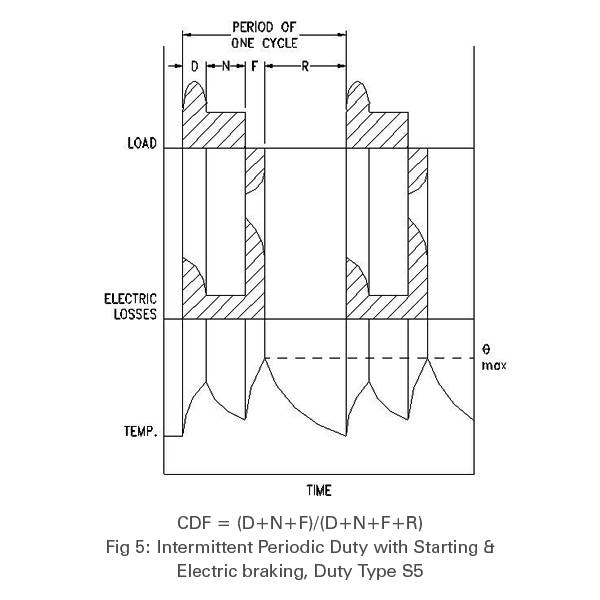 These motors are widely used in the following application:

The terms frequently used in the intermittent duty drives are as follows :

In general these motors conform to the following standards:

How to select Motors for Hoisting & similar duties ?

The formula to establish the rated output Pn in kW is

For horizontal motion ensure that the rated output Pn of the motor is greater than the power necessary to move the equipment given by :

What is Cyclic Duration factor ?

The ratio of the period of energisation/loading, including starting and electric braking, to the duration of the one complete duty cycle expressed as percentage.

Contact us for more information on Crane Duty Motors or to discuss your requirements. Enquiries are solicited for India, UAE and Africa on following Email id web@aakashpower.com